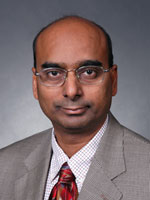 Professor of Biochemistry and Molecular Biology

‍Click here for a link to ongoing research or news video in this laboratory.
‍

Alahari, S.K., Regulation of metastasis by microRNAs, a book chapter published in microRNA in cancer, Springer, 2012.

Stromal cells and integrins: conforming to the needs of the tumor microenvironment.Alphonso A, Alahari SK.Neoplasia.Dec;11(12):1264-71. (2009)

MicroRNA function in cancer; Oncogene or a tumor suppressor. Shenouda, S.K. and Alahari S KCancer and Metastasis reviews. (In Press) (2009)

ST14 (suppression of tumorigenicity 14) gene is a target for miR-27b, and the inhibitory effect of ST14 on cell growth is independent of miR-27b regulation. Wang Y, Rathinam R, Walch A, Alahari SK. J Biol Chem. (2009)

Alahari S K and H. Nasrallah : A Membrane proximal region of alpha-5 integrin is essential for its interaction with Nischarin. Biochemical Journal 15: 449-457 (2004)

To search for all of Dr. Alahari's publications click here.

Newly Discovered Protein Discovered May Suppress Breast Cancer Growth Science Daily (Sep. 15, 2011) — Research led by Suresh Alahari, PhD, the Fred Brazda Professor of Biochemistry and Molecular Biology at LSU Health Sciences Center New Orleans and its Stanley S. Scott Cancer Center, has found that a protein discovered by his laboratory can inhibit the growth of breast cancer cells. The research is published September 14, 2011 online in the Journal of the National Cancer Institute.  Building upon Dr. Alahari's earlier discovery of nischarin, a novel protein that regulates breast cancer cell migration and movement, this current study examines the presence and levels of nischarin in breast cancer tumor tissue from 300 women as well as normal breast tissue samples. The researchers also generated derivatives of human metastatic breast cancer cells to test by manipulating the protein in a mouse model.  "We found that normal human breast tissue samples had statistically significantly higher levels of nischarin compared with tumor tissue samples," notes Dr. Alahari, "and tumors grew significantly faster in the cells where we blocked the production of nischarin. Tumor growth and metastasis were also reduced in the samples where we manipulated the overproduction of nischarin. Our research shows that nischarin can function as a tumor suppressor of breast cancer, inhibiting breast cancer progression. "The research team also describes the regulation of nischarin and reports the genetic mechanism by which this protein suppressed breast tumor growth, information that could be used to target new treatment approaches.  Excluding skin cancer, breast cancer is the most common type of cancer among women in the United States.  The National Cancer Institute estimates 230,480 new cases among American females this year, and 2,140 among men in the US, with 39,520 deaths in women and 450 deaths in men. Risk factors include aging, weight gain, combined hormone therapy, physical inactivity, and consumption of one or more alcoholic beverages per day.  A family history increases risk, as does never having had children or having a first child after age 30.  Mammography can often detect breast cancer at an early stage when treatment options are greatest and a cure is possible.  "Next steps include determining whether nischarin controls some of its tumor suppressor roles through regulation of the pathways we reported in this paper," concludes Dr. Alahari, "and these studies are already underway.  "The LSUHSC research team also included Dr. Robin McGoey, Associate Professor of Pathology, as well as postdoctoral fellows, Drs. Somesh Baranwal, Yanfang Wang, Rajamani Rathinam, and Lianjin Jin, Researchers from Duke University and Memorial Sloan Kettering Cancer Center also contributed.  The research was supported by grants from the National Institutes of Health, the Susan Komen Foundation, the Louisiana Board of Regents, and the Louisiana Cancer Research Consortium.

Suresh Alahari, PhD has been named the Brazda Professor of Biochemistry and Molecular Biology.  The named Professorship is in honor of Dr. Fred G. Brazda who was Head of Biochemistry for many years.

Dr. Suresh Alahari has been named one of New Orleans Magazine 2012 People to Watch!